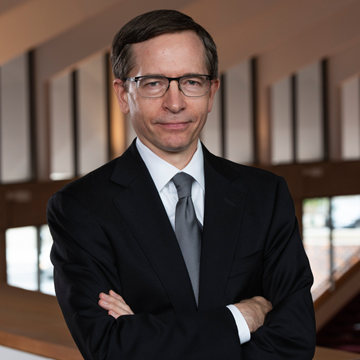 Blending a deep love of classical music with a passion for business, Peter Kjome is recognized as a thoughtful leader who engages key stakeholders to achieve artistic and economic success. He became President and Chief Executive Officer of the Baltimore Symphony Orchestra in February 2017. The BSO recently traveled on its first international tour in 13 years, with Music Director Marin Alsop leading the Orchestra’s debut performances at the BBC Proms and Edinburgh International Festival. During 2018, the Baltimore Symphony Orchestra released several recordings and celebrated the 10th anniversary of the Orchestra’s acclaimed OrchKids program. In addition, the Orchestra named its first endowed musician chair in over a decade as part of the BSO’s Second Century Campaign, which has now exceeded $47 million of a $65 million goal.

Prior to his BSO appointment, Peter Kjome served as President and Chief Executive Officer of the Grand Rapids Symphony, where he oversaw significant advancements of the orchestra’s artistic and educational initiatives while strengthening its financial position. The GRS successfully completed a $40 million endowment campaign and reached several multi-year collective bargaining agreements with its musicians, including a five-year agreement in 2016. In addition, Mr. Kjome was integral to the selection of Marcelo Lehninger as Music Director and Robert Bernhardt as Principal Pops Conductor.

On returning to the field of orchestral music, Mr. Kjome brought strong management and financial skills developed during his time at 3M Company, a leading global company based in St. Paul, Minnesota. At 3M, he served in positions of increasing responsibility in the company’s consumer business, including roles in strategic planning and marketing, along with significant international experience. He led projects generating substantial positive change during his time at 3M, including major projects in the company’s Six Sigma program.

Peter Kjome’s career in orchestral music began when he joined the Grand Rapids Symphony as an oboist. He served as a member of the orchestra for eight years, including six years as principal oboist, continuing a career that included performing as a substitute musician with the Cleveland Orchestra and Pittsburgh Symphony. During his time as a musician in the GRS, he was elected by his peers to serve as a musician representative on the orchestra’s board.

An alumnus of the Cleveland Institute of Music, Mr. Kjome received a Master of Business Administration from the Kellogg School of Management at Northwestern University. At Kellogg, he majored in marketing and management and strategy, receiving the Maurice L. Rothschild Scholarship in recognition of academic achievement and commitment to social enterprise.

Active personally and professionally, Mr. Kjome serves on the boards of Maryland Citizens for the Arts and the Cleveland Institute of Music. He is a past chair of the Group 2 orchestras of the League of American Orchestras and served on the boards of the Economic Club of Grand Rapids and Blandford Nature Center. His service has also included the Arts Advisory Committee of the 3M Foundation and the Community Capital Alliance. In 2011, the League of American Orchestras presented Mr. Kjome with the Helen M. Thompson award for exceptional leadership.